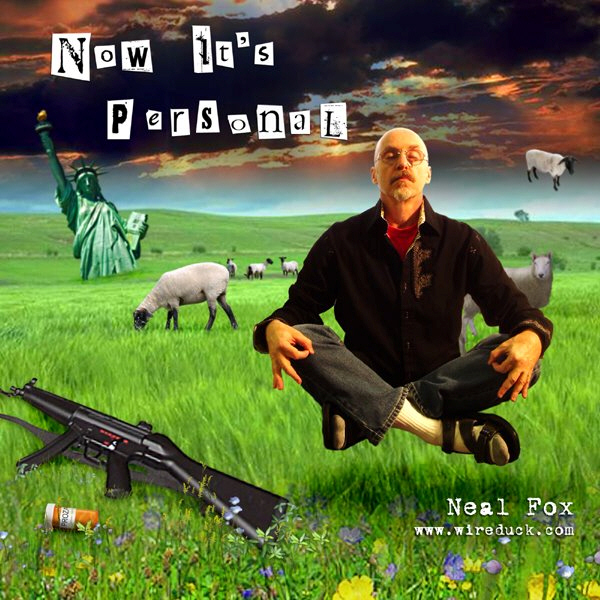 Ask Neal Fox about nearly any social issue, the power of audio branding and the frustrations that musicians experience when signing onto major record labels, and he can likely answer with a provocative CD, multimedia show or television jingle he composed.

Neal’s illustrious career has spanned from producing music for hundreds of commercials (Coke, Disney, SeaWorld, Lazy Boy) to recording nearly a dozen CDs under his own label, Wire Duck Records. In earlier days, while working under contracts with RCA and Polydor, he released the hit dance song, In the Jungle, from his 1976 album A Painting. Aimed at raising public awareness over the destruction of the Amazon Forest, the song’s success set him on an artistic path to social activism that has earned him kudos from mainstream and underground audiences alike.

While working as a partner with Patterson, Walz & Fox, he co-created audio sketches for hundreds of network television shows, including Eye to Eye with Connie Chung and Public Eye with Bryant Gumble. Among his most notable and profitable network gigs was devising the long-running theme for the CBS Evening News with Dan Rather, which Neal took further in later years with a critically acclaimed one-man show and CD, Thank You, Dan Rather.

The show chronicled Neal’s career transition from making good bucks in the jingle biz to losing that steady income once Rather was dropped by CBS for falsely documenting George W. Bush’s dubious military past. (Neal credits ProSound and Mike Krewitsky for mastering the Dan Rather CD with Genelec 8040AMP Speakers, ProTools and Waves Masters plug ins.)

The Brooklyn-born, highly prolific Neal, however, persevered. Working often from a garage studio at his former San Diego home, he went on to make his first full-length musical, Meat Street, plus a multi-media show knocking record labels, called Pigeonholes. Subsequent works include the edgy and provocative CD, Now It’s Personal, along with the politically incorrect music video F**k the Fed, which earned him two film festival awards in 2008.

When living in San Diego, Neal regularly stocked his studio with equipment from ProSound, saying he’s been a customer since the company launched in 1978.  Since moving to Florida five years ago, he’s taken the equipment with him and continues beefing up his studio with items such as KRK speakers, Apogee Duet, Universal Audio Solo 610 microphone preamp and Waves plug ins.

Neal’s latest projects include a show in the making titled, Conspiracy, which blends video, sound, animation and artwork. Once completed, he plans to conduct it in a theater and record it onto video. “If I develop enough interest, then I’ll take it on the road,” he says.

In addition, he is illustrating and writing the poems for a children’s book, geared to kids 3 to 10 years old and due for completion next month.

To learn more about this fascinating artist’s past, present and future endeavors, take a surf through his newest web site: TheRealNealFox.com.

This entry was posted on Friday, June 22nd, 2012 at 2:52 pm and is filed under ProSound Featured Artists. You can follow any responses to this entry through the RSS 2.0 feed.